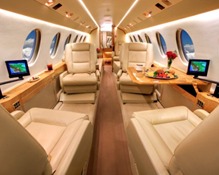 Dassault Aviation was the first to create a private jet with intercontinental range: the Falcon 50. Seventeen years later, they re-created it, keeping the features that made it such a success, while modifying others with more advanced technology. The result is a private jet that looks and feels like its predecessor, but easily supersedes it. The Falcon 50EX cruises faster at high altitudes; flies further; burns less fuel; and generally outperforms the Falcon 50 in every respect.

The cabin of the Falcon 50EX is perhaps the part of the jet that has changed the least. It still has a height and width of 5.9 and 6.1 feet, respectively. At 23.5 feet in length the Falcon 50EX features a total cabin volume of 700 cubic feet.

The nine-passenger seating configuration is generally laid out in one four-seat club arrangement, and a separate section of two facing seats and a three-seat divan. Work tables fold out between facing seats so work can be completed in-flight. Power plugs are available for laptops and office equipment. Temperature control is separate for the cockpit and the cabin, so both parties are comfortable in-flight. Space and equipment for hot and cold food preparation come standard, including an oven, ice chest, and coffee maker. 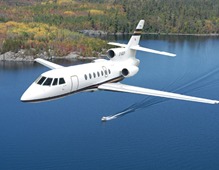