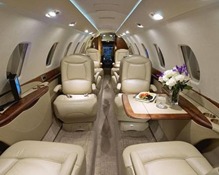 The Citation Sovereign is Cessna’s version of what a  business jet should be: comfortable, high-performing, and economical. The strongest feature of the Sovereign is its  range; it has coast-to-coast capabilities, like large jets, but still retains  the features that make midsize private jets so advantageous. It can take off in under 4,000 feet, a feat  still unmatched by other midsized jets, and can cruise at around .75 Mach (458 knots).

The Sovereign’s cabin is 25.3 feet long and can hold  anywhere between eight and nine 180-degree swivel seats. The interior is large enough that passengers  can stand up in the 5.7 foot-high cabin.

It should be noted that Citations are not just popular  with passengers, but with pilots too. The Citation series was designed with the  intent of simplifying flight as much as possible. Systems make sense and flight operations are  uncomplicated, resulting in consistently safer, smoother flights. 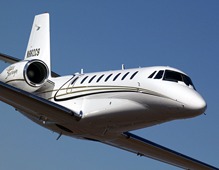